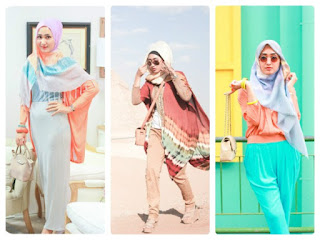 Hijab means is a headscarf worn by Muslim women; conceals the hair and neck and usually has a face veil that covers the face except for the eyes. According to The Free Dictionary also, Hijab means the veiling or seclusion of women in some Islamic societies, customarily practiced in order to maintain standards of modesty. Most muslims who wear the covering call it hijab, an Arabic word meaning “cover”. However, there are various forms of hijab that are referred to different names. “Fashion” is an art-related wearing hijab and clothing. According to islam that is related the Tabarruj, as it was meant for beauty. Islam not forbid the wearing hijab of various shapes or fashion for look beautiful.

According to the Oxford English Dictionary the definition clearly shows fashion  is part of day to day lives of people all over the world from the very primitive tribes to the people in developed country. Fashion trends nowdays give a big impact  towards fashion industry especially hijab fashion industry.

Wilson (2012) studied a variety of subcultures and religious groups who are influenced  by the globalization of consumerism and symbolism of modesty in fashion and argued that current definitions of modesty in media denotes two entirely different things, first meaning exposure of the female bother, and another concerning the diminishing visibility of Muslim women.It is seen that in the background of this paper, that change in global political structures and change in local largely influenced the representation of the Malay-Muslim women in Malaysia. Groups within the local power struggle deliberately created such image between opposition and governing parties. It is concurred that media reforms are closely linked to local media ownership and governance  in Malaysia that is fast being identified as a Muslim country. In order to fully dissect the extent of authentic female modesty display in media through this capacity, it is imperative to also analyse the power of the hijab agency and penetration of the veiling act among Malay-Muslims in countries that have Islam as a minority as well to determine cultural differences and influence of imperialism. Fashion magazines and websites nowdays, teach how to wear fashionable hijab styles to the woman wearing hijab. Hence, it  gives muslim woman style format of how to match the hijab with tshirt, pants and accessories.Hijab fashion industry is currently growing in line with the rapid development of social media such as facebook now and youtube. Social media such as facebook many Malaysians women to share tutorial of wearing  hijab and various accessories that can be match. Through Youtube video a variety of ways to wear the hijab is also use as a reference to many woman to wearing hijab.

This blog is made for UTM Space 2015 students